The integration is the first time Blackberry has announced a major plan for Cylance since its acquisition last year.

Vehicles are becoming increasingly complex with added driver-assist functions. Certain assistive safety functions need high degrees of reliability. The controllers and processors that manage these functions need regular updates and therefore need security solutions to prevent tampering. The Blackberry Cylance will be used to do exactly that.

Cylance will be used to ensure APK integrity and alert manufactures if it detects a faulty or malicious piece of software installed in the vehicle’s control system.

If it detects an anomaly, Cylance will alert the user and vehicle manufacturer. It will not, however, execute any mitigative measures – Blackberry leaves the response up to the manufacturer and the user.

“The architecture of the cars is changing, and we’re happy to be powering the traditional systems and the new next-generation systems safety systems,” said Grant Courville, vice-president of product and strategy at Blackberry QNX. “That brings in that need for reliability, obviously, but also a big need for security and resiliency…that’s where Blackberry comes in with Cylance.” 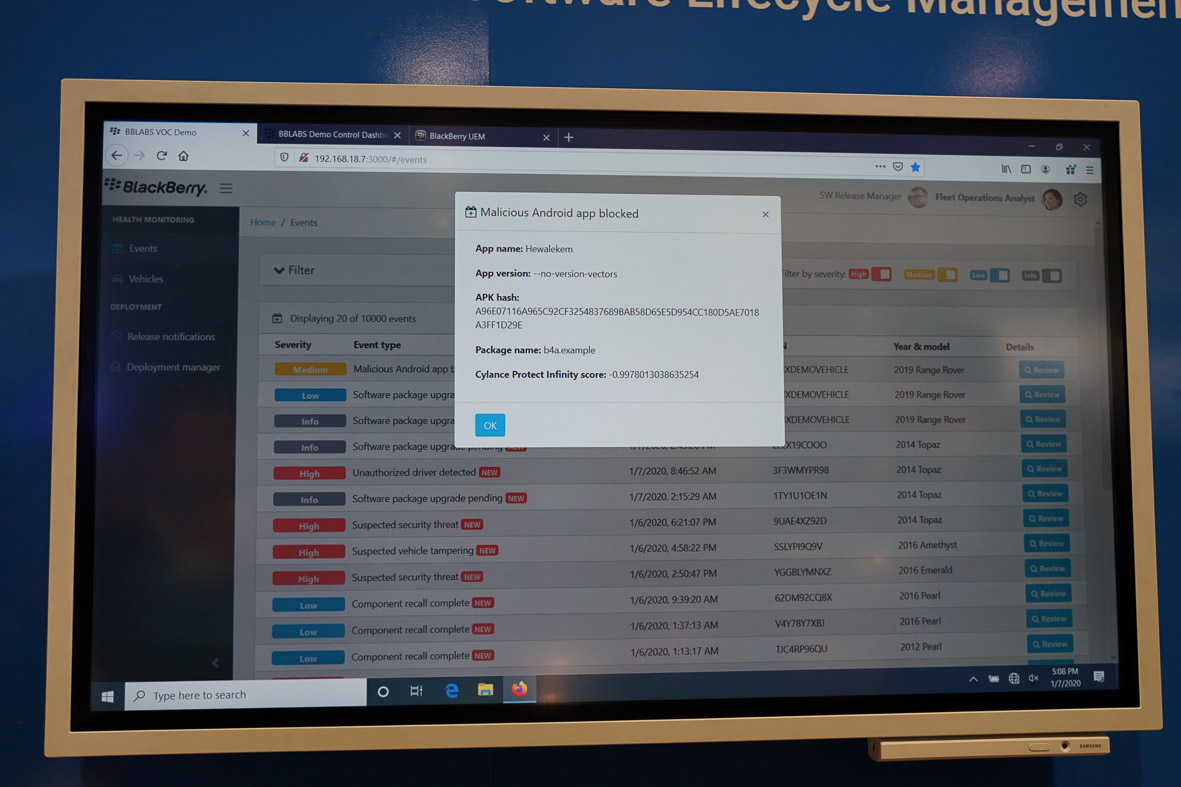 Cylance was able to successfully block a malicious piece of software from loading into the vehicle during a firmware update process.

A real-time demo at the booth demonstrated the detection process using the Range Rover Defender, which integrates QNX technologies into its systems. It was shown that Cylance was able to intercept a real-world malicious software before it was able to be uploaded into the car’s systems.

Cylance will also enable identity and persona detection based on the driver’s driving patterns.

In parallel with the Cylance announcement, Blackberry also announced a new partnership with Damon motorcycles, which will integrate QNX safety technology into motorcycles. 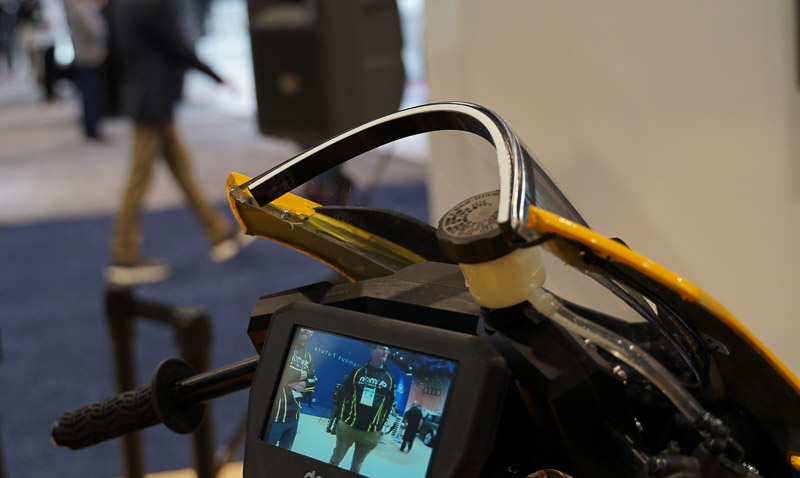 The white LED strip at the top of the Damon motorcycle’s windshield.

“We could have written it ourselves, but that takes years and millions and millions of dollars,” said Jay Giraud, Damon Motorcycles CEO. “More more than anything, it’s the testing time and the amount of data that QNX has probably collected off of its vehicle performance, and debugs with dozens and dozens of car OEMs to come up with a system as robust as theirs (Blackberry) is no small thing for us to have undertaken as a startup. We couldn’t have done it.”

Giraud said that Damon’s partnership with Blackberry is a multi-year journey and that they’re planning on more features down the road.

Renovo was another partner that merged QNX technology into its products. Through their partnership, the Renovo’s Insight automotive data management platform combined with QNX to generate more valuable data that will be used to improve advanced driver assistance systems (ADAS). 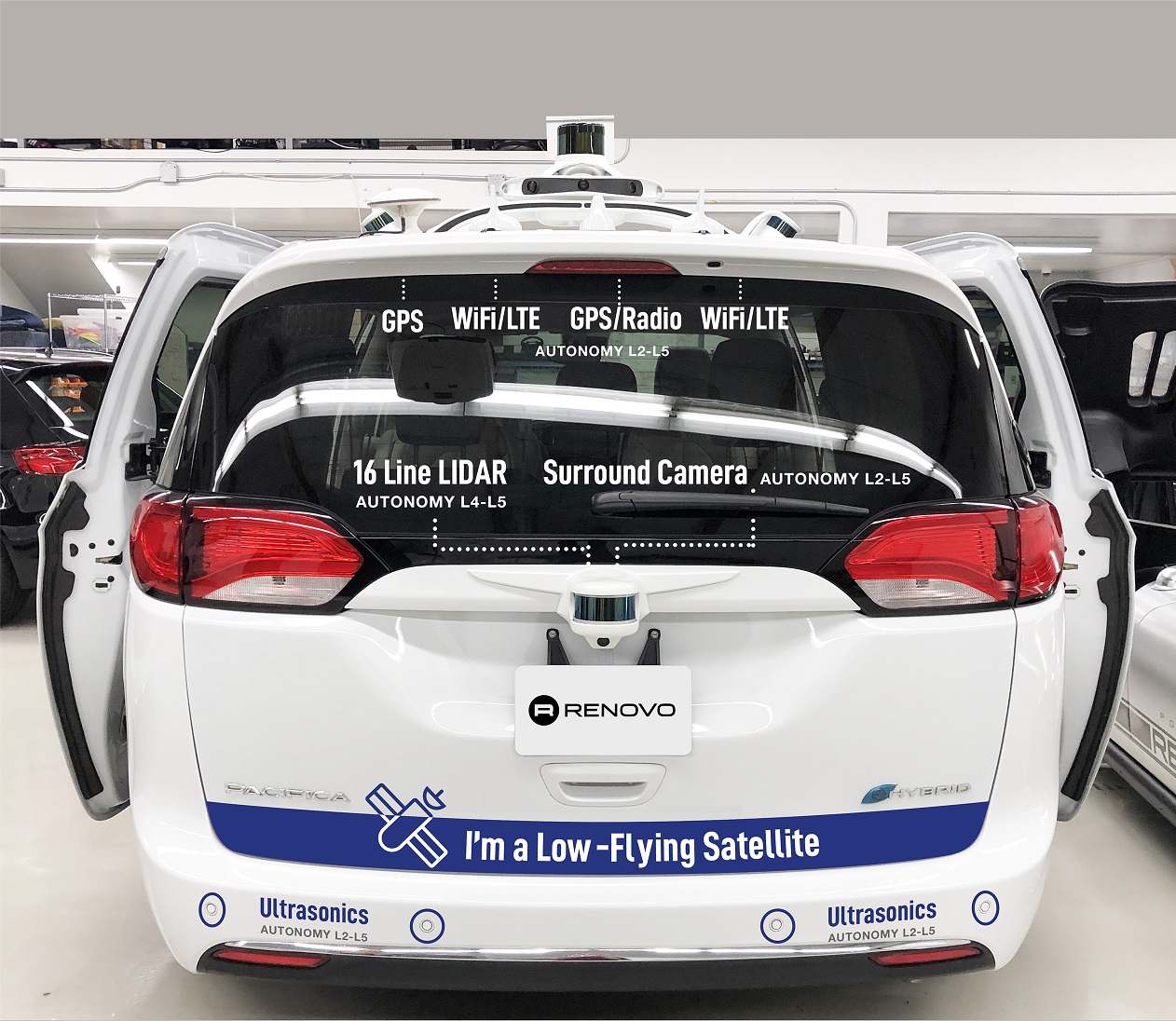 The Renovo Pacifica generates over 4TB of data per hour from its various sensors. 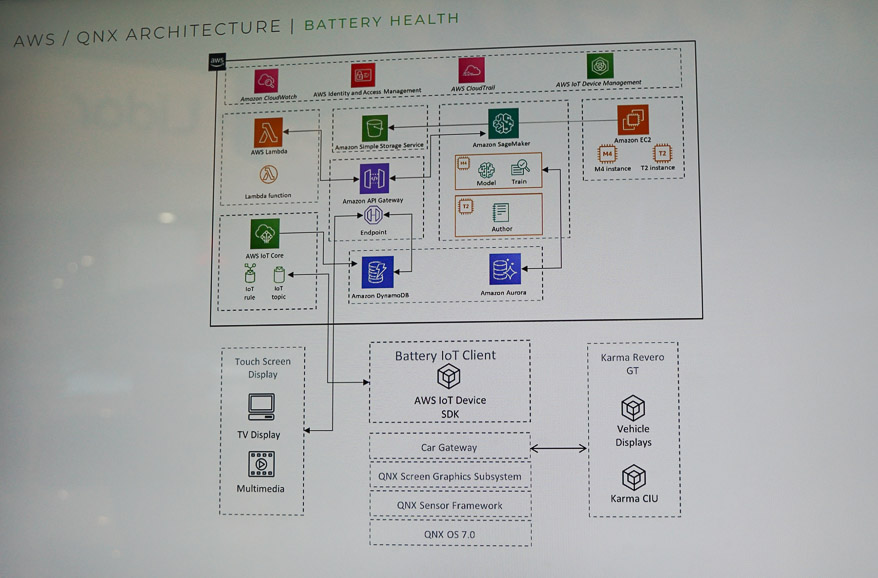 An example of how data flows from the battery health monitor in an IoT sensor through the AWS cloud.

BlackBerry says QNX is being used in over 150 million vehicles today world-wide. In addition, the company is working as an advisor to the Canadian government to establish regulations surrounding autonomous vehicles. Blackberry received $40 million from the Ontario provincial government last year to accelerate autonomous vehicle innovation as part of the Autonomous Vehicle Innovation Network.

Numerous sensors in assistive vehicles generate vast loads of data. To prevent inundation, QNX vehicles parses most of it on the vehicle itself and only sends actionable insights.

Certain data can be inherently private. Insights into how drivers control their vehicles, where they frequent, and their breaking patterns can both help QNX fine-tune each vehicle to their primary handler and be very touchy.

“You’ll hear expressions like privacy by design,” noted Courville, “In other words: don’t design your vehicle just to be safe, secure, reliable, and then do the ‘oh yeah privacy’… no, decide it right from the beginning.”

This section is powered by IT World Canada. ITWC covers the enterprise IT spectrum, providing news and information for IT professionals aiming to succeed in the Canadian market.

The streaming wars start Nov. 12, when Disney+ comes to Canada

Needing protection from hackers, Samsung’s smart TVs get an app that controls how viewer data is shared

Driver complaints about Teslas accelerating on their own prompt federal review

HTTP://PILIPINAS.SHELL.COM.PH/ PILIPINAS Shell Petroleum Corp. (PSPC) said on Friday that its oil refinery in Batangas province continues to operate safely while its retail stations serve as emergency response sites while Taal Volcano is erupting. The listed company told the stock exchange that its staff and business partners in its Tabangao refinery “are safe and all accounted for.” It said while air quality had been assessed as good in the area of the refinery, “staff have…

PCCI ties up with TESDA for nationwide job training

This couple is grappling with a late-career layoff, but their retirement is more secure than they think

If Harry and Meghan become residents of Canada, they’ll have to deal with CRA’s dreaded form T1135

A Q&A with Sen. Kelly Loeffler on her unlikely path to Washington—and what she’s planning to do there

Needing protection from hackers, Samsung’s smart TVs get an app that controls how viewer data is shared

Driver complaints about Teslas accelerating on their own prompt federal review