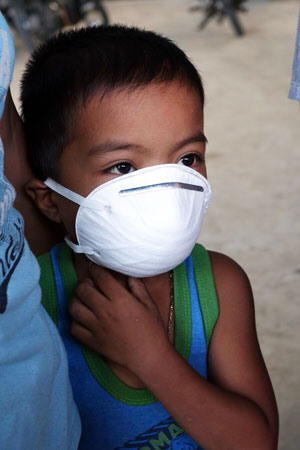 The Department of Health has ordered a price freeze on 218 medicines as well as other medical goods in Batangas province, following widespread panic-buying of N95 masks. — WORLD VISION

THE Department of Health (DoH) has ordered a price freeze on 218 medicines as well as other medical goods in Batangas province, following widespread panic-buying of N95 masks, which are rated for filtering out volcanic dust.

Issued Tuesday, the order, DOH 20202-005 ordered prices to be frozen in the province. The DoH is authorized by law to regulate prices of medical products. Batangas province, where Taal Volcano is located, has been placed under a state of calamity, which also triggers more general price-control measures.

Also in the list are respiratory tract medicines, antibiotics, and cardiovascular medicines.

The order covers N95 masks, which are capable of filtering out particulates like volcanic dust. It said the permitted N95 price range was P45 to P105 pesos, while the price range for disposable surgical masks was P1 to P8. According to reports, consumers have been hoarding N95 masks, with prices rising to as much as P500 each.

The Department of Trade and Industry (DTI) also warned against profiteering and counterfeit masks.

During its inspection of a district in Manila where dealers of medical supplies are clustered, Trade Undersecretary Ruth B. Catelo found 12 out of 17 stores selling fake N95 masks. The DTI will be filing administrative charges against these store owners.

“Under Article 52 of the Consumer Act (these activities fall under) unfair and unconscionable sales acts or practices. They are taking advantage of the situation, the difficulties being experienced by consumers,” she said at the same briefing on Wednesday.

The DTI has noted that N95 masks are not on the suggested retail price list and added that it has contacted foreign suppliers to send more inventory.

DTI said in a statement Wednesday that its monitoring teams in Cavite, Laguna, Batangas, Quezon, and Metro Manila are tracking the prices of masks and other goods.

The DTI’s own findings are that N95 masks are selling for P120 to P150 per piece — outside the DoH’s own prescribed range — while surgical masks that normally sell for P1 each have been selling at P4 after the Taal emitted heavy ash starting Sunday.

“While we recognize that the N95, surgical, and other similar masks as medical supplies are under the jurisdiction of the Department of Health (DoH), the DTI readily dispersed its teams to monitor the prices and supply of these masks to assist the DoH and the consumers,” Trade Secretary Ramon M. Lopez said.

“As the Health Department, we understand that its utmost priority is ensuring the lives and health and safety of those who are affected by the phreatic eruption. Market surveillance and monitoring is the best form of immediate assistance that the DTI can provide. As the President constantly underscores, A whole-of-government approach is highly necessary and called for especially during times of calamities and disasters.”

DTI said that drug and medical stores have committed not to raise prices.

“However, the Price Act (Republic Act 7581) provides that the National Price Coordinating Council (NPCC) which the DTI and DoH are part of, can recommend to the President the inclusion of these masks in the list of basic or prime goods. When approved, the NPCC through the recommendation of the DoH and consultation with relevant stakeholders, can set an SRP, if found necessary,” the DTI said in a statement.

Along with foreign supplies, DTI had also asked domestic suppliers and major drug store chains including Mercury Drug, Watsons, and Southstar Drug to immediately restock in areas affected by the calamity.

“At the interim, current inventory in their branches and warehouses in non-affected areas will be distributed to their stores in CALABARZON (the Cavite-Laguna-Batangas-Rizal and Quezon region) and Metro Manila while waiting for the arrival of new stocks,” DTI said.

The DTI said in an earlier advisory that stores found to have been profiteering will face administrative or criminal charges.

The department reiterated that the prices of manufactured basic and prime goods will continue to conform to the DTI Suggested Retail Price (SRP) Bulletin published on Sept. 30.

The Batangas government has issued its own price freeze on basic goods and commodities, which is authorized by the Price Act, which comes into force upon a calamity declaration.

Price-controlled goods must still be sold for the suggested retail price (SRP).

Meanwhile, the Department of Tourism (DoT) is advising tourist establishments to consider health risks to visitors and workers should the situation at Taal Volcano deteriorate.

It said in a statement Wednesday that it “advises all tourism enterprises operating in all affected areas of the Taal Volcano disaster to immediately cease operations in light of the Phivolcs Alert Level 4 warning. The continued health, safety and welfare of our workers and tourists remain a top priority at this time as authorities have not downgraded the advisory on an imminent eruption.”

The Department of Labor and Employment (DoLE) on Wednesday also announced it will provide initial emergency assistance of P72.3 million to workers in the area. Labor Undersecretary Renato L. Ebarle said in a statement: “The assistance will be in the form of emergency employment under the government internship program where beneficiaries will be mobilized by the LGUs in the rehabilitation of nine affected municipalities of Batangas.” — Gillian M. Cortez and Jenina P. Ibañez