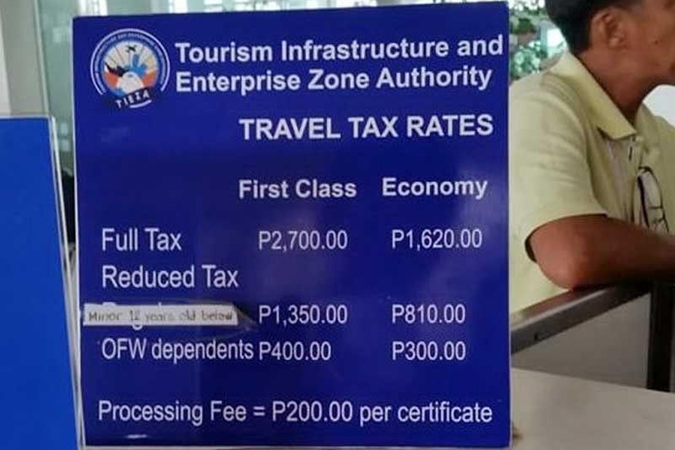 THE Air Carriers Association of the Philippines, Inc. (ACAP) is asking the government to eliminate or reduce the travel tax to help the tourism sector recover from the China coronavirus outbreak.

ACAP Executive Director and Vice-Chairman Roberto C.O. Lim made the proposal during a House committee hearing on Wednesday on the effects of the coronavirus epidemic, formally known as Covid-19, which originated in the Chinese city of Wuhan.

The official Twitter account of the House of Representatives quoted Mr. Lim as saying: “We are the only country in ASEAN (Association of Southeast Asian Nations) that imposes travel tax. P1,620 is a hefty fee. Its removal can spur travel demand.”

The House said Representative Rozzano Rufino B. Biazon of Muntinlupa asked ACAP to submit its “studies and recommendations” on the matter.

ACAP has said it expects to issue about P3 billion worth of ticket refunds in the next two months after the Philippine travel ban on China, Hong Kong, Macau and Taiwan.

The government wants Filipinos to visit domestic destinations in the face of the decline in international tourism due to the outbreak.

President Rodrigo R. Duterte has said he will visit Boracay, Cebu, and Bohol.

The Tourism department estimated that foreign tourist arrivals in 2019 at 8.26 million, exceeding its 8.2 million target.

The Securities and Exchange Commission (SEC) warned the public anew of more groups peddling fraudulent investments. In a statement on Wednesday, SEC noted five groups, namely: Cryptec, CryptoPeso, V2R Trades, Lao Razon Trading and/or Lao Razon Marketing and Sakto Online Advertising, for operating without licenses. These added to the list of groups it earlier flagged for trying to lure the public into unauthorized investment activities since the coronavirus outbreak started last month. The offshore cryptocurrency…

Villar still the wealthiest Filipino with P283B net worth

PAL plans to resume some flights

Aviv Russ feels like the cards have been stacked against his generation — and he’s not wrong. Russ is a millennial, the infamous cohort of people born between 1981 and 1996. He graduated from Boston-based Emerson College in 2009, just as the Great Recession gutted the jobs market for years. He spent his first few years after school fighting for low-paid work as a production assistant. His mentors told him, “‘Dude, you missed the good…

Does 5G cause or spread the coronavirus? Here’s what experts say