I spent a few days hopping around New York City last week, trying to keep my wallet in my pocket. It wasn’t that I was on a tight budget. But I was testing the Apple Card, the new credit card from Apple, and according to its reward program, that’s the most lucrative way to shop.

Introduced back in March, the Apple Card is now generally available to anyone with an Apple mobile device who wants to apply.

If you use the Apple Card via the wireless, contactless Apple Pay system that is becoming increasingly popular with iPhone owners and businesses alike, you get a fairly generous return on every purchase of 2% cash back, no strings attached. That’s a bonus which lines up with the best credit cards around, from major issuers like JP Morgan Chase and Bank of America.

So when I grabbed a cup of coffee and a cookie at a cute bakery on the Upper West Side, for example, paying with the Apple Card through my iPhone earned me an almost immediate refund of 11 cents on my $5.63 purchase. (The cookie was good, too.) Later, after traipsing around on a hot summer day, I picked up a $2.87 bottle of water at CVS, also using wireless Apple Pay. Along with the hydration, I scored 6 cents cash back.

A big difference between this credit card and its competition is that unlike other rebate cards, the Apple Card’s cash reward appears almost immediately after the purchase is processed. To access these funds, you simply open the Wallet app on your iPhone, which is the home of Apple Card itself, showing your current balance, recent transactions, and other info updated in almost real time. The Wallet app also displays your “Daily Cash Balance.” These funds can be spent like a debit card on purchases using the digital Apple Pay Cash card, sent to a friend via Apple Pay, or even used to partially pay off the balance on your Apple Card.

There’s another, better benefit to using the Apple Card: Paying for purchases from Apple using the digital credit card earns 3% cash back. For example, my family’s $5 per month New York Times cooking app subscription now brings back 15 cents each month. And the $120 a year I pay for a family iCloud storage plan earns $3.60 in rewards. And if I decide finally to upgrade my aging MacBook Pro with the rumored 16-inch model coming later this year (please revamp the keyboard, Apple!), the cash back perk will be even more substantial—$90 on a $3,000 purchase, for example. There’s no other way to get such high rebates on purchases directly from Apple (though some cards affiliated with retailers like Target and Amazon will give 5%, if you’re buying Apple hardware sold at those outlets).

Taking a swipe at other cards

When using the Apple Card at establishments that aren’t set up for app-enabled, contactless payments, things get markedly less magical. To start, you have to pull the (admittedly cool looking white, titanium) Apple Card out of your wallet—and that can be a drag. Then, the rebates drop to just 1%, lagging competing cards.

A fair counterpoint, however, to the meager 1% cash back on physical card swipes is that Apple also forgoes fees that other cards charge. Apple Card has no annual, over-limit, late, or foreign exchange fees. And that’s great, because those can add up. For instance, imagine if I spent $1,000 over the course of a month on a competing card to get $20 cash back, instead of the $10 I’d get from swiping my Apple Card. Every other credit card I know of charges late fees—and one $35 late fee would quickly wipe out that $20 cash back reward, and then some. Foreign exchange fees can also add up quickly (though there are other credit cards, particularly those affiliated with airline rewards programs, that also forgo forex fees).

Assessing whether the Apple Card makes financial sense for you, therefore, requires making assumptions about how much you spend with Apple (including all your iTunes purchases and subscriptions), how often you’re able to use mobile payments, and how often you typically trigger the fees that Apple doesn’t charge.

For me, it certainly makes sense for all my Apple purchases and when I’m paying via mobile. But Apple also just added Uber as 3% rebate partner—a perk for its cardholders—and future partnerships like this could make the Apple Card more attractive to use at more businesses.

Even when you’re not rebate hunting or avoiding fees, the Apple Card feels like a futuristic, if long overdue upgrade to spending on plastic in the 21st century.

The application process, within the Wallet app on an iPhone or iPad, takes just a few minutes and, if you’re approved, the card is added as an option in Apple Pay immediately. The white, titanium physical card is optional, but came via FedEx within a few days after I requested one. Activating the card was as simple as holding it near my phone with the Wallet app open. 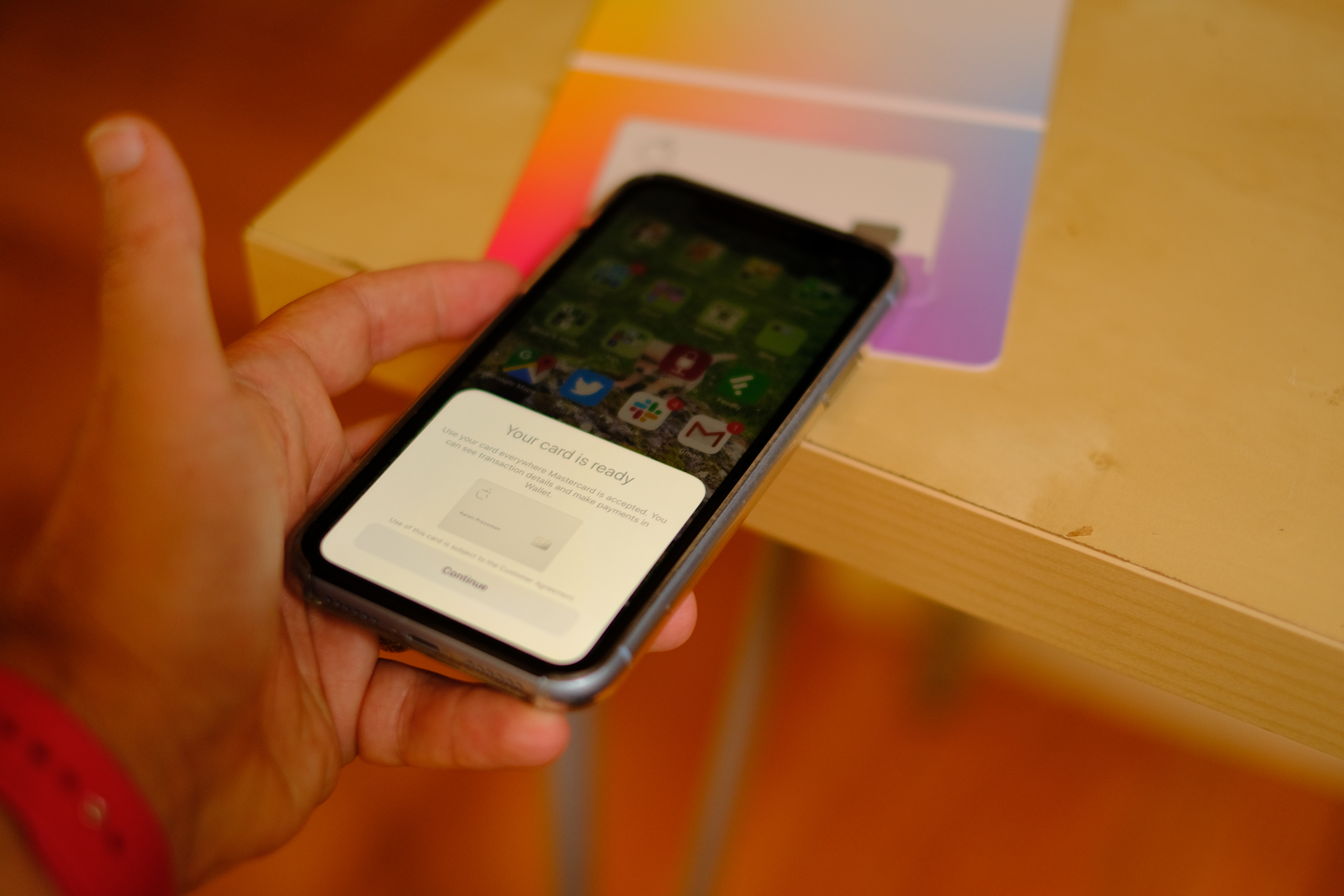 Every transaction quickly appears listed in the Wallet app on my iPhone, with a categorization (like “transportation” or “food and drink”) along with the rate of cash back I received (3% for spending with Apple, 2% for mobile payments, and 1% for everything else). Tap on any transaction,

and Apple shows on a map exactly where you made the purchase. For some stores, like that CVS where I got the water, there’s even a deeper link, with all kinds of info about the business, like the phone number, hours of operation, and customer reviews. Apps for my other credit and bank cards aren’t nearly so nimble.

With a couple of teenagers out in the wild using our family credit card, it can be hard to identify who spent what where, with the typically meager information provided by the credit card company, so the geo-location info is fantastic. Of course, I can’t yet opt to switch the whole family to the Apple card—there’s no option yet to add additional cardholders to my account (a feature available with every other card I’m aware of).

Another potential perk: Apple has committed to not share cardholders’ spending data with marketers, a promise partner Goldman Sachs has also agreed to.

But there is a downside to that privacy policy. As a result of refusing to share data, information that goes into the Apple Card doesn’t come out. That means there’s no way to see it on the web or share it with other financial apps, like Mint or Personal Capital, that can help you budget and track spending across multiple bank and credit card accounts. There also doesn’t appear to be any way to generate an annual report, a helpful tool for tax preparation, though Apple could always add that feature later.

Another thing that could be added to the Apple Card later is discoloration, apparently. A close reading of the card’s care instructions has prompted concern that its white, titanium material may lose its luster when housed in leather wallets, or after rubbing against other cards. But after my initial week of Apple Card use—mostly through the app, which provides the best incentives—I can report that my “plastic” remains pristine.

With version 1.0 of the Apple Card, it’s a little hard to square the product with Apple CEO Tim Cook’s assertion of “the most significant change in the credit card experience in 50 years.” But for people who spend a lot with Apple, it’s a solid addition to your wallet—at least your mobile one.

—A rare tech company where women dominate
—Walmart CEO: VR training helped save lives in the El Paso shooting
—Can Apple afford to make its streaming video service free?
—How to compete with technology in the age of automation
—Disney’s streaming service won’t be available on the most popular streaming devices
Catch up with Data Sheet, Fortune‘s daily digest on the business of tech.

THE DEPARTMENT of Agriculture (DA), through its Agriculture Credit Policy Council (ACPC), has approved an initial P1 billion for loans to help the sector amid threats to food security caused by the coronavirus disease 2019 (COVID-19) pandemic. Agriculture Secretary William D. Dar said in a statement the allotment is part of the agency’s Expanded Survival and Recovery Assistance Program for Rice Farmers (SURE Aid) and Recovery Project. The loans will provide working capital to ensure…

PHL WiFi use increases in March

BW FILE PHOTO THE Securities and Exchange Commission (SEC) is ordering lending and financing companies to extend the deadline for loan payments amid the coronavirus disease 2019 (COVID-19) pandemic. The SEC issued a notice on Thursday to remind financing companies, lending companies and microfinance non-government organizations to implement a 30-day grace period for all loans, whether principal or interest, falling due within the enhanced community quarantine (ECQ) from March 17 to April 12. This is…

Bank of Nova Scotia, Toronto-Dominion Bank, Royal Bank of Canada, National Bank of Canada and Canadian Imperial Bank of Commerce said on Friday they are cutting interest rates on credit cards to provide relief to customers affected by COVID-19 pandemic. Late on Friday, Scotiabank said it would reduce credit card interest rates to 10.99 per cent for personal and small business clients who have been approved for, or seek, payment deferrals. Earlier, in separate statements,…